On a frigid afternoon in early February, Mary Ann McClain takes her pit bull Lucy for a walk along the docks in the small river town of Gallipolis, Ohio. She heads down the dock and stops in front of a green shanty boat that, although endearing, doesn’t quite fit in with the large, looming yachts docked in the adjoining spaces at the boat club. A hand-painted sign reading Turtle Back in large pink letters hangs on the front of the boat. Mary Ann, her boyfriend, Dean Marsh, and Lucy live here to define their own lifestyle - not by their home but by where their home can take them.

Mary Ann and Dean have lived on their houseboat ever since they decided to build a home that would allow them to travel and live independently. Mary Ann, who has struggled with homelessness throughout her life, had been on government assistance for 15 years before moving in with Dean. In 2008, shortly after the two met, Mary Ann and Dean decided to begin building a boat with what little resources they had. 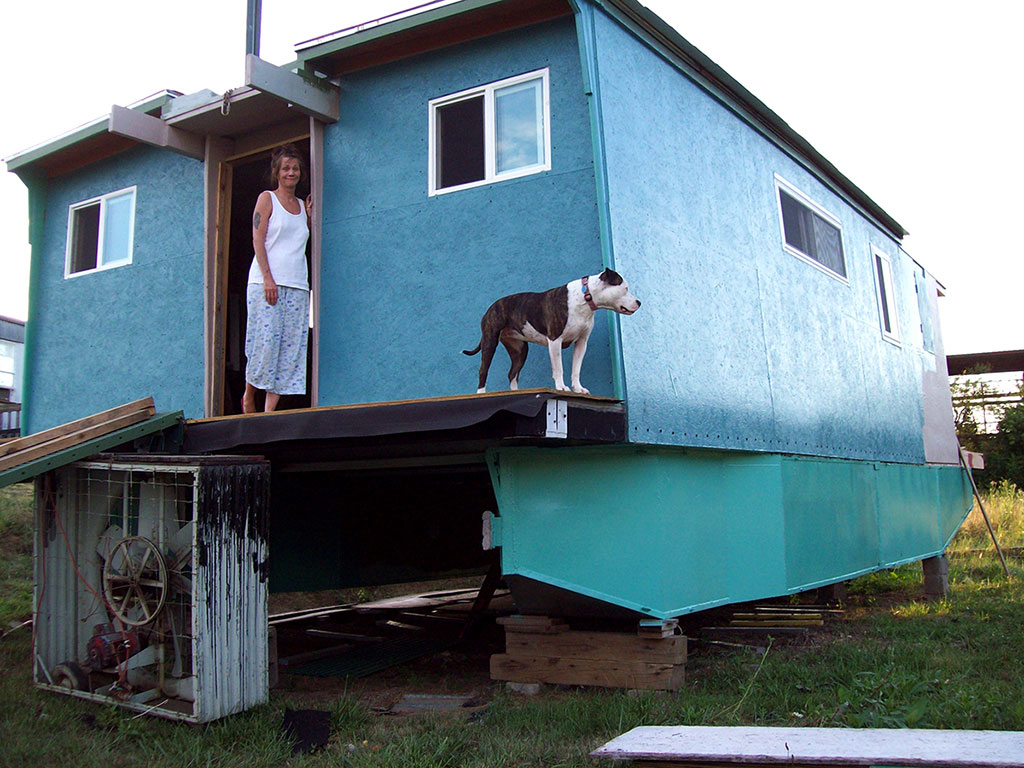 Mary Ann McClain stands on the front of the Turtle Back with her dog, Lucy, while the boat was still being built in Parkersburg, W.Va. Photo provided by Mary Ann McClain

“We were drinking a bunch of beer, and I said I really want to be like a turtle and have my house on my back,” she said. “[So], Dean started building a small model. He started making little pontoons out of cardboard and sticks and stuff. Next thing I know it’s 2008 and he started building.”

For more than six years, Dean worked on the boat piece-by-piece, building pontoons and flotation devices in his brother’s backyard in Front Royal, Virginia. They didn’t “just run out and buy everything” at once, but took it month by month, devoting most of their money into building the boat “one steel box at a time.”

The two saw their work pay off in 2011 when a flood lifted their boat from the workspace and it floated for the first time. In the fall of 2013 they put the boat in the river and began their journey from Parkersburg, West Virginia down the Little Kanawha River, uncertain about how the boat would survive the harsh winter weather and water conditions. They were pleasantly surprised when the boat seemed to fare well in the water, withstanding the currents and remaining stable even when large industrial barges passed by.

The day before Thanksgiving 2013, Mary Ann and Dean finally experienced what happens when weather and water combine. A storm hit that night, forcing Dean and Mary Ann to dock their boat along the Ohio River in Gallipolis, Ohio. They were grateful to be welcomed in by the dock master at the Gallipolis Boat Club that branches off of the Ohio River in the Chickamauga Creek.

Three days later they woke up as the boat was surrounded by a thick layer of ice that would halt their journey. “We left and we had no idea winter was going to get like this,” Dean said. “[That] ice was going to be on the river. There were no docks to tie off to. The river out there’s dangerous.” Since November, the houseboat has rested at the Gallipolis Boat Club. 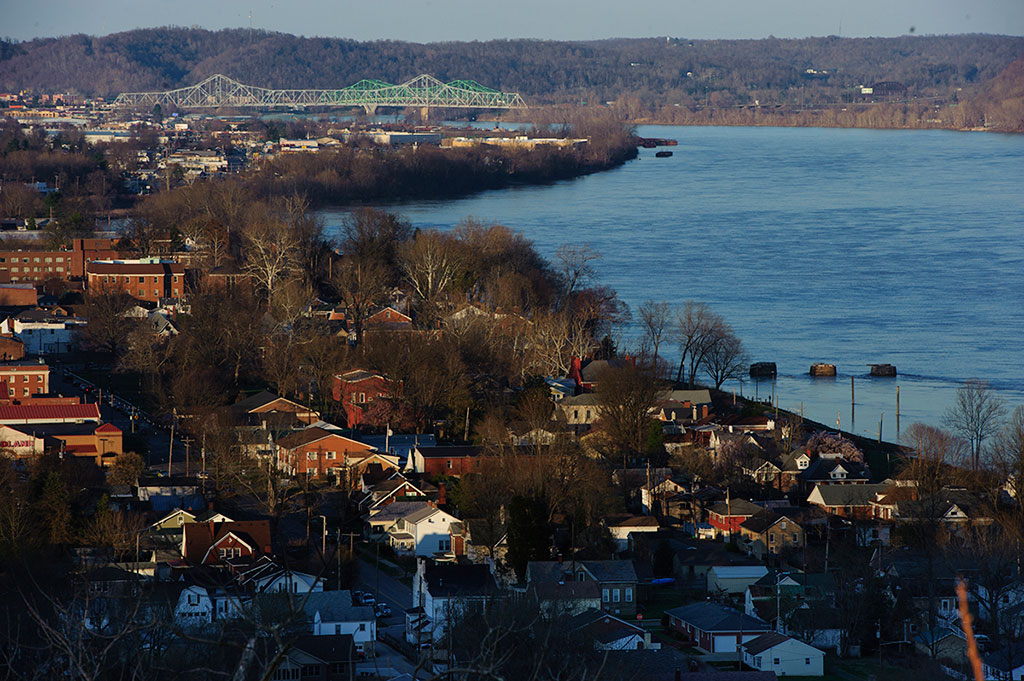 Gallipolis, Ohio sits along the Ohio River. Mary Ann McClain and Dean Marsh docked their houseboat at the city’s boatclub following a storm in November, 2013. The region’s harsh winter weather forced the couple to live there into the spring. Photo by Emily Harger

Living on the river has been an alternative yet fulfilling lifestyle for Mary Ann and Dean, where no two days are the same compared to their temporary home back in Front Royal. “Life’s just too safe,” Mary Ann said about their life before the Turtle Back. “You know what store you’re going to. [You] know, just everything’s the same, same, same. It’s different all the time now.”

“ Go to the other side of the river and it's a whole new neighborhood. ”

There is a constant momentum and change of scenery along their journey that provides Dean and Mary Ann with a different sense of place every day they travel. “You go a mile down the river and it’s just completely different,” Dean said. “Go to the other side of the river and its a whole new neighborhood.”

Initially, the couple decided to wait out the winter in the boat club and sail south in May. Dean decided instead to stay docked at the boat club for another year, giving him time to weld new pontoons and equip the boat with extra flotation.

While the future is uncertain for Dean and Mary Ann, their journey continues to offer them a purpose and the autonomy they’ve always wanted. 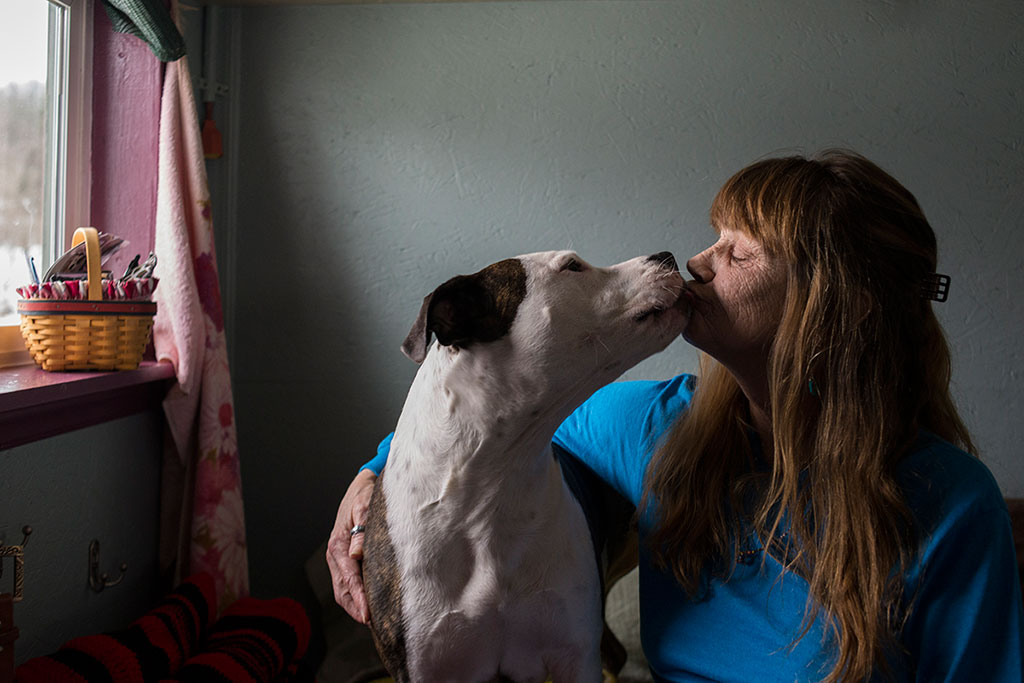 Mary Ann McClain gives a kiss to her dog, Lucy, on her houseboat in Gallipolis, Ohio. Mary Ann and her partner, Dean, have been living on a houseboat they built by hand since November, 2013. They have plans to head down the Ohio and Tennessee Rivers. Photo by Brooke Herbert Hayes