Here inside the old train depot , the boomtown that Buchanon speaks of is pictured all over the walls. The Murray City Improvement Committee purchased, renovated and converted the historical building into a museum commemorating its history of coal.

The depot tells the story of their city in the hills, busy and developed, with some 5,500 people, a train station and a coal industry that helped fuel World War II. It had a prominent role to play in Ohio’s economy. It also had a semi-professional football team, a hotel, a gambling hall, an opera house, about five saloons for each church, and “Murray City’s World Famous Hunks’ Kazoo Band,” once featured in the Athens Messenger.

Strictly speaking, Murray City is now a village. It has two bars, a post office, and as of 2010, just 175 households. The population is dwindling. According to Mitchell, who operates the museum, people have to leave town to find work.

“There’s no employment,” Mitchell says, gazing at the empty street across the railroad tracks.

“Once they get the sewer system, there’ll be industry coming in,” Mitchell says.

Murray City’s world famous kazoo band is long gone, and headlines about Murray City in the past few years have not been so light-hearted.

In December 2010, an article about the village reached a statewide audience through the Columbus Dispatch: the Murray City village council had refused grant money for neutralizing the acid mine drainage that afflicts the town’s stream, Snow Fork Creek.

Snow Fork is the second largest sub-watershed of Monday Creek, a tributary of southeastern Ohio’s Hocking River. According to a report by the Monday Creek Restoration Project, a nonprofit organization devoted to rehabilitating the area’s streams, abandoned underground or surface mines comprise approximately 67 percent of the Snow Fork watershed.

Nate Schlater, watershed coordinator of the MCRP, said that the runoff from these mines—which is acutely toxic to aquatic life—had culminated in an acid seep that looked “like a fire hose coming out of the hill.” This particular seep was the second highest source of acid to Snow Fork, which can account for about half of all the acid entering Monday Creek during high flow conditions. It’s one of the few remaining untreated sources of acid mine drainage in the area, and treating this particular site was crucial to the overall health of the Monday Creek watershed.

As such, the MCRP worked to secure money for the installation of an alkaline limestone “doser” to neutralize the acid seep. Schlater, along with his former supervisor Mike Steinmaus and an environmental specialist from the Ohio Department of Natural Resources, presented the project proposal to the village council in 2010.

But the council unanimously rejected the remediation plan. To the dismay of the MCRP, the council preferred that the creek remain acidic, and that is precisely why the Columbus Dispatch story received so much attention:

The more acid mine drainage in their creek the better, the village council said, because it kills bacteria from raw sewage. The village lacks a centralized sewage system and few residents have household septic systems. The majority of the city’s waste is discharged directly into Snow Fork Creek.

The Dispatch story, written by Mary Beth Lane, was headlined “Acid runoff in creek ‘treats’ village sewage,” and it propelled the small town into an unflattering spotlight.

The coal industry left Murray City with little else but a cramped grid of company houses, unemployment and acid-polluted water. To some, it may stand to reason: Why not put that mine drainage to use?

“To act like the acid is a sewage treatment system is not realistic,” Schlater said.

When the Dispatch article was published, however, no one could say definitively how the acid affected the sewage. 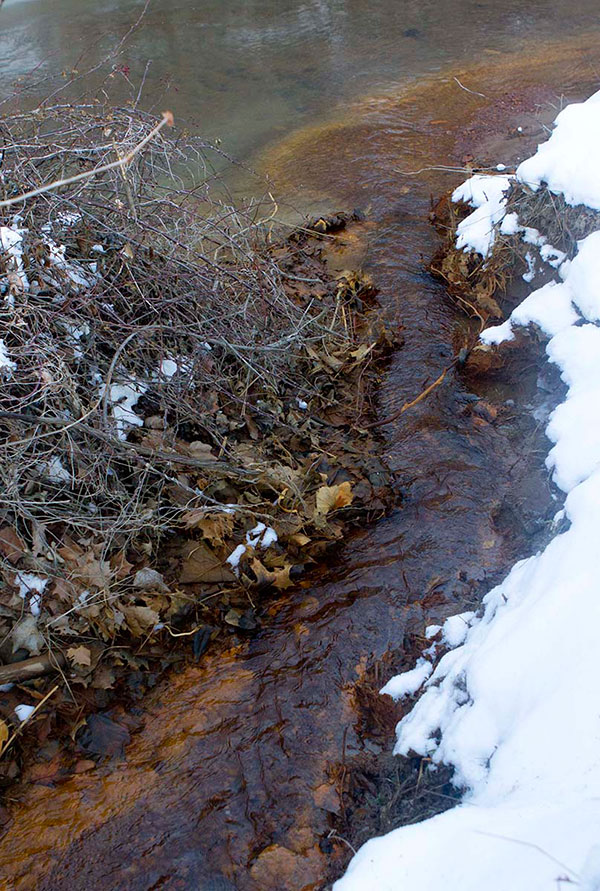 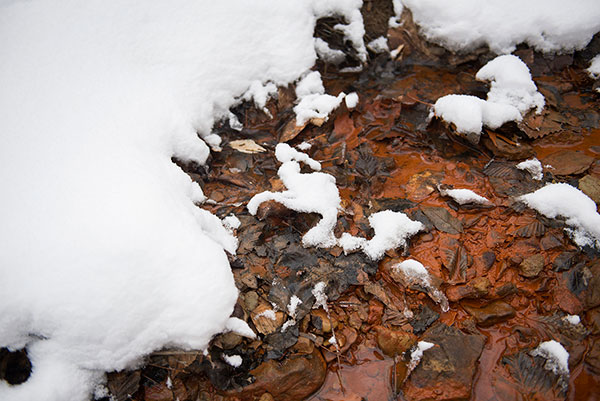 Creeks flowing through Murray City, Ohio, show evidence of acid mine drainage, a seeping condition from abandoned coal mines that turns the bed of creeks a bright orange and is highly toxic to aquatic life. The Murray City Village Council believes the more acid mine drainage in its creek the better, because the drainage kills bacteria from raw sewage. Murray City lacks a centralized sewage system and few residents have household septic systems. The majority of the village’s waste is discharged directly into Snow Fork Creek. Photos by Tyler Stabile, Jasmine Beaubien and Isaac Hale.

Acid Mine Drainage and Sewage

In 2011 Renee Reber, an Environmental Studies graduate student at Ohio University’s Voinovich School of Leadership and Public Affairs, aimed to change that with her capstone Portfolio for Leadership Practicum. With an advisory committee of Natalie Kruse, Ted Bernard and Guy Riefler, as well as the support of the Ohio Environmental Protection Agency (EPA) and the MCRP, she and Schlater gathered samples from Snow Fork Creek for bacterial and chemical testing.

Her findings indicated that there was, in fact, some validity to the council’s claims.

According to Reber’s experiments, just eight percent of an E. coli population could survive a 25 percent dilution of acid mine drainage water. Ninety percent of the E. coli pollution survived the water control equivalent.

In other words, the acid mine drainage seemed to kill the bacteria. Most in-stream E. coli samples collected during normal flow levels were in compliance with EPA public health nuisance laws.

But Reber was quick to point out that levels of acid resistance vary among bacteria. Indicator bacteria may be affected, she said, but over 100 other pathogens found in human waste—including typhoid fever, gastroenteritis, cholera, dysentery, infectious hepatitis, aseptic meningitis and encephalitis, according to the Ohio Department of Health—may persist.

In Schlater’s opinion, the precise numbers of bacterial populations present in the stream are beside the point.

“You’re not allowed to directly discharge sewage into a stream, bottomline, whether the stream is acid or not.” Sewage discharge laws don’t relate to bacterial concentrations, he said, they relate to sewage discharge.

“ You’re not allowed to directly discharge sewage into a stream, bottomline, whether the stream is acid or not. ”

And even if the acid does kill bacteria, it doesn’t eliminate the “visual and olfactory manifestations” of sewage.

“We counted 19 straight pipes coming in from houses, directly into Snow Fork,” Schlater said. “Two of them literally flushed while we were standing there.

“This is not a single situation here,” he said. “It’s very, very common. Most of the small communities you drive through in this part of Ohio don’t have sewage treatment, or at least not adequate sewage treatment.”

“This part of Ohio” is one of 32 Ohio counties located in Appalachia. Approximately 35 percent of Ohio land falls within the boundaries of the region, and according to the February 2014 Ohio Poverty Report, it is home to all five of the state’s highest county poverty rates, ranging from 22 to 32.2 percent.

Appalachian households generally spend a higher proportion of their home income than the rest of the nation for water services, the report found, and asking them to pay more is infeasible. Wastewater treatment plants are expensive, and in small towns, there are fewer residents to carry the operational overhead costs.

In the smallest and most impoverished communities, nothing short of large grants will cover the funding gaps of infrastructure costs and a community's ability to pay. “Without external subsidization many of these systems will either collapse completely or slowly decline because of lack of system maintenance and investment,” the report says. 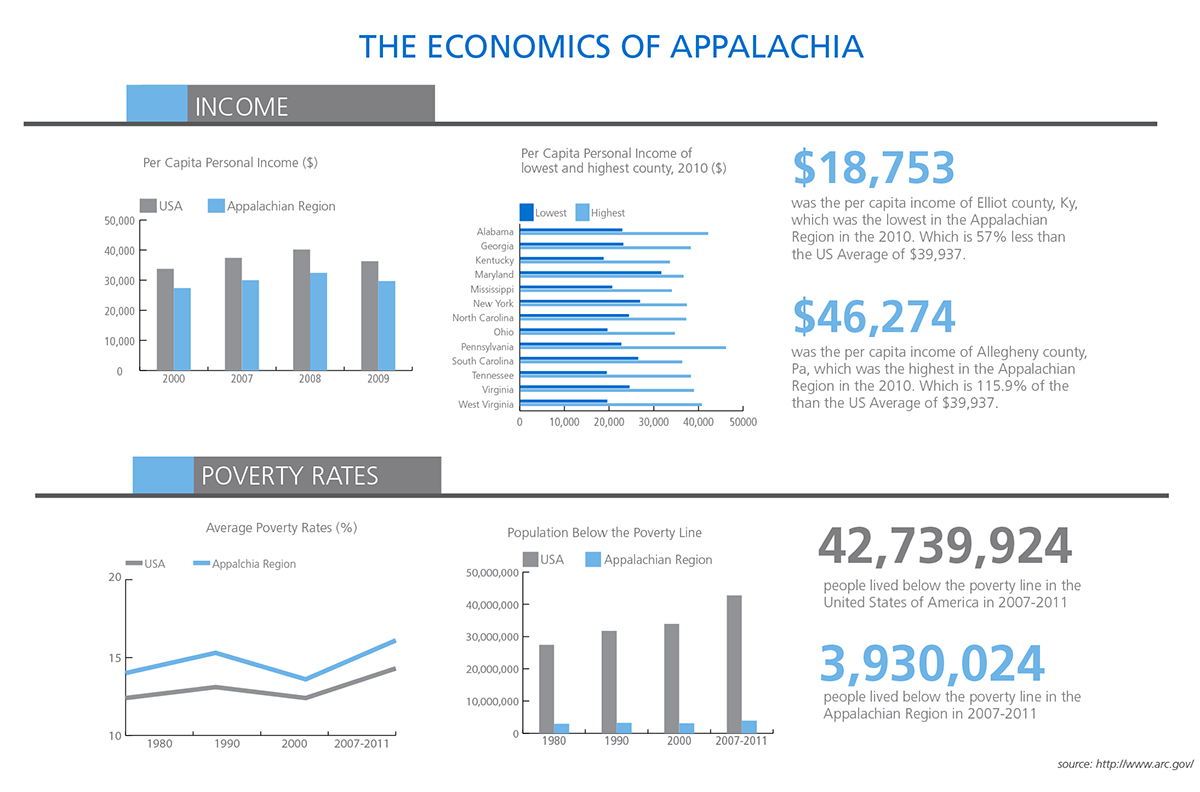 Or, in the case of the sewer-less town, the system will never be built in the first place.

Gary Goosman, director of the Corporation for Ohio Appalachian Development and mayor of Amesville, an Athens County village of 154 people, is well-versed in the challenges of building a sewage treatment system for a small community. The Ohio EPA approached Amesville years ago on account of fecal bacteria violations downstream. The community had no centralized sewage system, and household septic systems were old and failing. It needed to find a solution or pay the fines.

Rather than build a centralized sewage treatment system, Amesville opted to pilot a low-tech, decentralized community septic treatment called a “lagoon system,” at a lower cost of installation and operation.

It took nearly three years to identify and secure funds.

“These avenues of getting money from the feds or from the state are very convoluted and complicated, and most mayors around here are just part-time mayors that don’t have extensive training and familiarity with all these funding resources,” Goosman said. “It’s a big challenge. People have to keep their existing systems together with duct tape and baling twine to just stay up and running,”

And that should be of some concern — in 2008, an EPA survey identified 83 communities across Ohio with “serious sewage overflow problems” amounting to an estimated need of $7.5 billion over the next twenty years. According to a 2009 American Society of Civil Engineers report, local governments are typically responsible for 95 percent of wastewater bills. Most other crucial infrastructure programs receive long-term federal backing, the report says, and water and wastewater infrastructure do not.

After the Dispatch story ran, the Ohio EPA extended the village a $30,000 loan to compile a feasibility report on different sewage infrastructure systems. So far, said Mitchell, the museum operator, nothing’s played out.

Murray City is unable to support individual household septic systems because the federal Department of Agriculture’s Nature Resources Conservation Service has deemed the soil conditions unsuitable for septic leaching. Sitting within the confines of the small village, the idea of a centralized municipal sewage treatment facility feels absurd. Amesville’s lagoon treatment system seems more appropriate for a community of this size, although the amount of space between the hillsides might prove problematic.

But perhaps there is a fourth option worth exploring. In her final report, “The Interaction of Acid Mine Drainage and Untreated Sewage Discharge in Snow Fork Creek, Murray City, Ohio,” Reber makes a synergistic proposal based on a number of recent peer-reviewed studies. The innovative idea?

Passive, controlled co-treatment of mine drainage and wastewater. In other words, a carefully managed operation in which “acid runoff ‘treats’ village sewage.”

Back in the train depot, the appeal of reminiscing about Murray City’s past is understandable. The museum is a source of strength in the face of uncertain future.

There is no clear answer to the village’s problem. It needs a sewage system to bring in jobs, and it needs jobs to afford a sewage system. The final outcomes of the feasibility report remain to be seen, and for one reason or another, Reber’s report was never delivered to the council.

Observing the resilience of the community represented on the museum’s walls, though, it’s easy to feel hopeful that the village will find a solution. And it would seem especially fitting if that solution was derived from the same source as Murray City’s identity: a proud history of coal mining.