Frogs are among the many creatures keenly affected by water quality. They spend a large portion of their lives immersed in rivers, lakes and streams and are sensitive to pesticides, herbicides, water acidity and silt. In fact, frogs are like early warning systems; they are to water what the proverbial canary is to the coal mine.

Tom Shisler, site manager and naturalist at the Wahkeena State Nature Preserve in Lancaster, Ohio, said poor water quality has an especially detrimental impact throughout the region because southeastern Ohio is so environmentally diverse. He attributes this diversity to the Appalachian hills, which he says deter farming and some large-scale industry. This has preserved the forests for plant and animal life.

Amphibians often are the first to suffer when water quality issues arise.

The Wahkeena Nature Preserve has many species of reptiles and amphibians, and Shisler said amphibians often are the first to suffer when water quality issues arise.

“If you see that amphibian species are in trouble or in decline,” he said, “that can be an early indicator that hey, there’s a much larger problem here that’s not going to affect just the amphibians, but all species, including us.”

The pH level of water in rivers and streams has little effect on humans, and silt is easily filtered out of drinking supplies. But pesticides, herbicides and other agrochemicals have the potential to alter frogs’ development and growth. Research has shown these chemicals may affect humans as well.

Ohio University biology professor Scott Moody has spent years studying Ohio’s population of the eastern spadefoot toad — the only endangered frog species in the state. The species has suffered significant habitat loss, which has contributed to its decline, but Moody said pesticides and fertilizers in the water have increased the toads’ struggles.

“Of course we need to be acutely aware of all these chemicals in our drinking supplies,” he said.

“ What’s bad for the frogs is also bad for us humans. ”

One contaminant with significant impact on frogs is atrazine, a widely used herbicide. Atrazine can turn male tadpoles into female frogs, among other effects. It has been linked to cancers in rats with muted development of their offspring and subsequent generations. In humans, exposure has been tied to cancer, obesity and birth defects.

Tyrone Hayes, a researcher at the University of California, Berkeley, was a pioneer in the discovery of atrazine’s adverse effects.

Through his research, Hayes determined that atrazine significantly affects frogs as an endocrine disruptor, which means it interferes with their hormones. When male frogs were exposed to atrazine their larynx did not grow, a sign that the chemical affected their levels of androgen and testosterone.

The human endocrine system is very similar to that of frogs, and atrazine is a common contaminant in processed drinking water. Hayes said one of his greatest concerns is the effect of atrazine on developing fetuses, which are trapped in utero with the chemicals their mothers are exposed to.

“What makes the fetus more vulnerable is, it’s going through these developmental events that depend on very delicate hormone balances,” Hayes said. “If you’re disrupting that balance, either by chemicals that mimic hormones or chemicals that alter hormone production, then you’re altering that development.”

Moody said the levels of atrazine in southeast Ohio are fairly low because the crops it is typically used on — corn and sorghum — are not often farmed in hilly regions. But atrazine contamination has been noted in Athens City water reports in years past.

“One of the biggest problems that we have, and that we deal with a lot here at the Preserve, is that humans do not consider themselves part of the ecosystem,” Shisler said.

But, Shisler said, it is time for change. The Appalachian region already faces the strains of damage done by years of irresponsible mining. According to the Ohio EPA, over 1300 miles of streams in southeastern Ohio are polluted by acid mine drainage, which has taken its toll on species. Agricultural runoff and silt from eroded land have only amplified those species’ struggles. Adding more chemicals to the water would create even more stresses for on the environment.

“Having diversity and having lots of different kinds of life — plant and animal — is important,” Shisler said. “Let’s try not to affect that in a negative way. Let’s try to be positive in our interactions with the environment.” 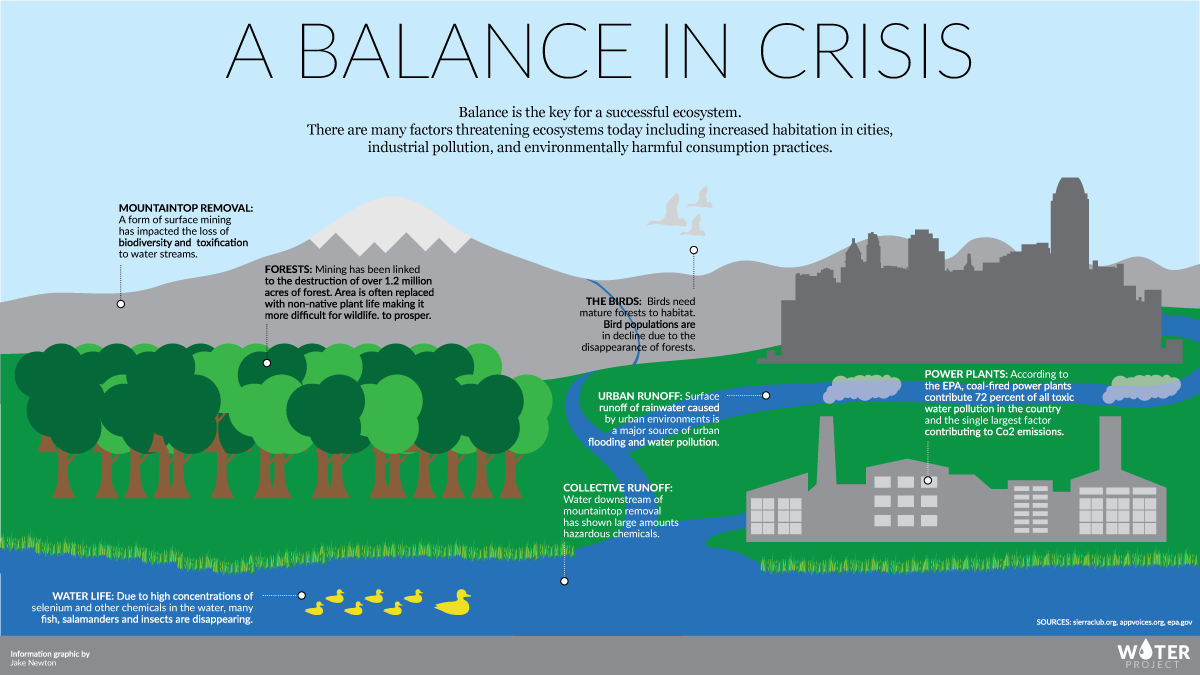